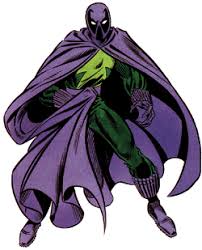 This is Hobie Brown aka THE PROWLER
He was a window washer who had a racist boss. He invented some devices to make window washing safer and got fired for it. So naturally he did what anyone would do after that. Used his gadgets to make a super villain costume. He decided to steal the Daily Bugle's payroll as The Prowler and then return as Hobie Brown to give the money back. It didn't work out. He later became a part of Spider-Man's supporting cast.

The Prowler's suit used compressed air for various effects: making his cape ridged for gliding or firing cleaning fluid, explosives, flares, gases, and darts from this gauntlets.  Or in a pinch he just uses his gauntlets or boots to fire blasts of compressed air. His gauntlets also sport steel tipped climbing claws while his boots are shock absorbent for leaping and falling.

First Appearance Amazing Spider-Man #78 and he was created in part by Stan "the man" Lee.

Truth is, years ago I spent $300 to get  www.alienatedproductions.com to make me a Prowler costume. It turned out okay. I wore it for Halloween and people kept calling me Spawn. GRRRRR! I am tearing up the house looking for the only pic I took with it on.

Posted by Kyle Tyrone Ferguson at 12:04 AM