The new Mighty Avengers title is going to feature a majority of minorities. You heard right. Luke Cage is going to head up a team of Avengers with She Hulk, White Tiger, Spectrum (Monica Rambeau - aka Captain Marvel, Photon, and Pulsar), a all new Ronin, Falcon, Blue Marvel, Superior Spider-Man, and Power Man. 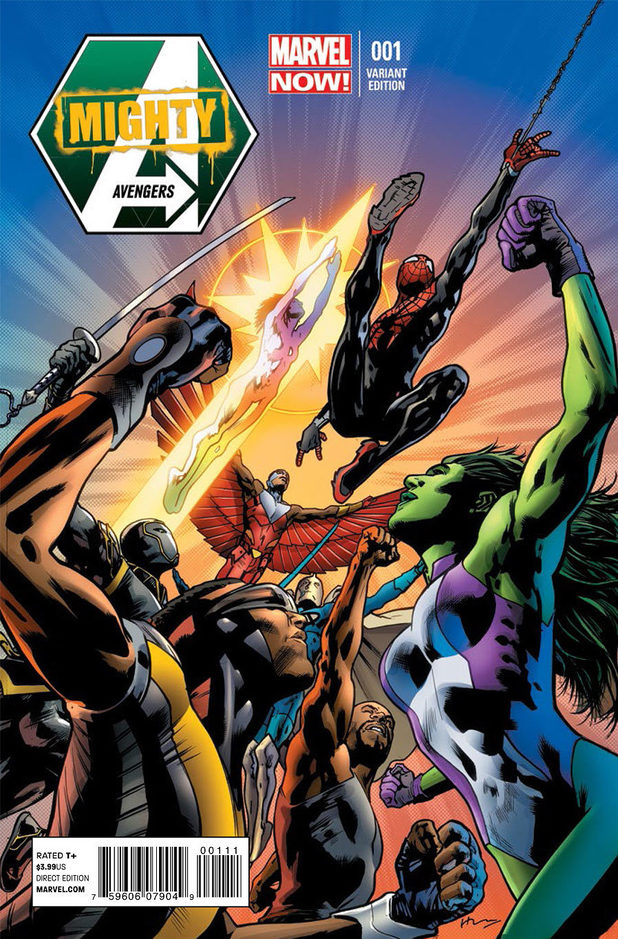 Well I for one am excited about this title! I've always loved She Hulk and Monica Rambeau. It's good to have her back!  Luke Cage grew on me some time ago, I think I started liking him when he was called a "cape chaser" in a book I read once. I'm interested in White Tiger as I'm warming up to the character. Part of that is due to playing her heroclix figure. The White Tiger from the Incredible Hulk set is 58 points of kick butt awesome sauce. So I'm interested to see what she is going to do. I am hoping that this new Ronin is a girl dressed as a man (a la Mulan). I was a big fan of the (Echo) Ronin. Not sure about Blue Marvel yet. I enjoyed his origin story, but not sure how what they are going to do with him. Power Man hasn't appeared much. I don't like the costume that much, but from what I hear about his powers, I'm interested in him. Falcon is the only member I'm like meh about. I think they are going to need to do something to make and keep him interesting. Superior Spider-Man is another character that I only know from articles I've read. So I'm a little unsure how to feel about him.

All in all, I'm excited about the characters and how they are going to interact.

As for the creative team, Greg Land is the artist...and I'm a little worried...just a little. I haven't seen much of his work, but I have seen a lot of HATE sites for him. I honestly don't see anything wrong with his stuff. But there are sites that try and break down all of this craziness that he is accused of. All I can say is WOW. My only fear is that a little of his stigma might rub some readers the wrong way...BEFORE they read the book. I've usually been able to look past art if I liked the story.

SO my VERDICT is give this book a chance when it hits the stands!

What do you think?