Batman vs Superman - no spoiler reaction

If you've read a few of my articles, Facebook posts, or tweets, you know at least two things about me. First, I'm a nerd dad and second, I love superheroes. The latter being the most important part for this article. I'm calling this article a reaction rather than a review of Batman vs. Superman. There are enough reviews floating around so i thought I'd try something a little different. Still, watch for a review for the movie soon. But I digress...

Excited about this film for some time, I went into Batman vs Superman expecting DC's A-game. My excitement caused me to mistakenly buy extra tickets online. The film was like begrudgingly giving an A student a C+ grade on an exam. That is what the student earned, but not what the teacher expected.  Batman vs Superman had all the tools it needed to be great movie, bankable actors, big budget, compelling characters, great costumes, and excellent effects; everything it needed to reach the top, and it fell short.

I will not say that Batman vs Superman was a bad movie. There was an valiant effort on my part to see the movie before reading any of the many negative reviews.  My first reaction on Facebook after watching the movie..."not sure how I feel about it." The film had let me down on several levels which left me a little numb.  Much to my chagrin, there were points in the film that were frustrating; There were other points to the movie that were awesome. I'll stay away from specifics for now to keep the spoilers out of this. Bad reviews or not, I don't think that this film is a deal breaker for DC. Suicide Squad is on the horizon and a Wonder Woman film is in the works as well.

Batman vs Superman, Dawn of Justice was not anything special, and that's too bad because it should've been.

How did you feel about the Batman vs Superman? Leave a comment, but no spoilers please.
Posted by Kyle Tyrone Ferguson at 7:32 PM No comments:

My minute with comic legends


I was fortunate enough to spend a day at Fantasticon in Lansing, Michigan. Fantasticon is a pop culture and comic experience that spans several locations throughout the year. These show locations include cities in Michigan, Indiana, and Ohio. This is the first of my articles on my time as Fantasticon. While there, I had the awesome opportunity to sit at the Comic Legends of the Bronze Age paned.  The panel consisted of Keith Pollard, Mike Grell, Arvell Jones, and Kurt Lehner. Each of these talented gentlemen have over a decade of experience in the comic industry. It was fascinating listening to their stories of how they "broke in" to the industry, who they worked with, and what they worked on. 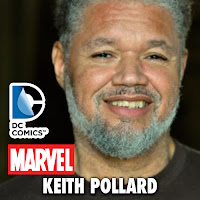 Keith Pollard and Arvell Jones, two artists from the Detroit area, told a story of how they worked together in comics. Apparently the legendary John Romita Sr. looked at both of their work and had issues. He said that Pollard's work was good but lacked excitement. He said that Jones work was also good but lacked consistancy. THe faces Jones drew from panel to panel looked like different characters. So Mr. Romita did what any forward thinking Marvelite would do...he teamed both Pollard and Jones together. I suppose he figured that both these talented guys together would equal a great artist. 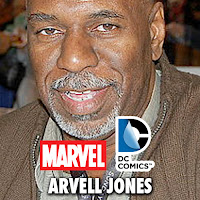 Both Pollard and Jones had a hand in creating two of Marvel Comics baddest ladies. Jones co-created the bionic armed Misty Knight. Pollard brought  Felicia Hardy aka The Black Cat to life in the pages of the Amazing Spider-Man. Pollard and Jones also did various work for DC. 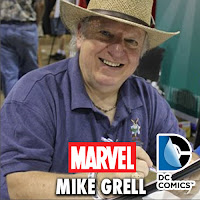 Mike Grell, creator of the DC character Warlord has served as both artist and writer. Not only has he done work for DC but Grell has done several creator owned works for various companies.  This includes the series Shamans' Tears. Among many of Grell's accomplishments in comics was the Green Arrow limited series Longbow Hunters. This led to an 80 issue Green Arrow run for Grell. He is credited for changing the direction of Green Arrow making him an 'urban hunter' and focusing Green Arrow on more street level threats. During the panel, Grell said that his influences on the character earned him a small nod in the current CW television series Arrow. In the first season of Arrow Laurel stands before a Judge Grell. He also mentioned how he had to explain to his nephew that he didn't get paid for that. I told Grell that I would check out the Longbow Hunters series. I'll post a review after I've finished it. 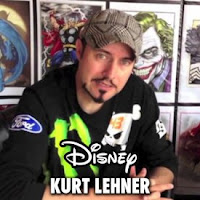 Kurt Lehner said that he grew up following and emulating the other panelsts. He feels that where he developed his "modern-retro" comic art style. While he's been involved for almost two decades in comics, he didn't feel he technically was a legend of the Bronze age. Many of Lehner's work involved design work for animated features and films including Disney and Marvel. Lehner shared an interesting story that he said was the one thing that he was most proud of. At the time Lehner was working with the legendary Stan Lee on The Marvel Action Hour; Stan the man told Lehner (after looking at some of his work) that if he had walked into (Stan's) office in the 70's, he would've hired him on the spot. 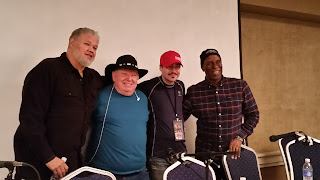 I had a chance to sit down and talk one on one with both Arvell Jones and Keith Pollard. Look for those follow up articles soon. It was awesome meeting these gentlemen and I hope to see them again.


Posted by Kyle Tyrone Ferguson at 3:32 PM No comments:

The first DLC for Fallout 4 is right around the corner. The trailer looks impressive. This should be out next week. I'm excited... Hope you got your season passes...

What do you think of the trailer? Are you excited?
Posted by Kyle Tyrone Ferguson at 9:35 PM No comments:

Getting ready for Agents of SHIELD midseason premiere

There are only a few days left before the midseason premiere of Marvel's Agents of SHIELD on March 8th. A lot has happened to Agent Coulson and his group. There have been some setbacks, some victories, and some twists and turns. Before we think about the future of SHIELD, let's take a quick look back at SHIELD's past.

SEASON ONE Introduced us to a resurrected Coulson and his mobile response team meant to deal with mysterious situations in a world of miracles. The big bad of this season is called the Clairvoyant while Coulson searches for the secrets of his return to life. While handling some strange cases and working to take down the Clairvoyant, the team grows and SHIELD collapses (this is in direct connection of the MCU movie Captain America: The Winter Soldier). Hydra moles within SHIELD are exposed including a member of Coulson's team. The Clairvoyant is also revealed to be a SHIELD/Hydra agent. This story arc concludes with the Clairvoyant's defeat and a setup for next season dealing with Skye's father and the side effects to Coulson's resurrention.

SEASON TWO Introduced us to Skye's parents and the Inhumans (people given powers by alien crsytals). Coulson's team fights for SHIELD to regain public and government trust. As Coulson learns of his connection to the Inhumans and his leadership is called into question. It is reveled that Coulson isn't the only SHIELD agents left trying to do good, but these agents don't trust Coulson and try to unseat him as director. Inhumans also plot against SHIELD. As this story arc finishes up, Skye is the first of Coulson's Inhuman agents, the rogue Inhumans are defeated, and Coulson makes a sacrifice. In the aftermath, Simmons disappears.

SEASON THREE Focuses on Coulson's team working to get agent Simmons back as well as the growing population of Inhumans. We meet the government's reponse to Inhumans in the ATCU. Also the threat of a rogue Inhuman who is killing other Inhumans is revealed. As our heroes pursue the Inhuman killer, it is revealed that he is someone close to home. Coulson tries to foster an alliance with the ATCU and works to bring Simmons back. Ward works with Hydra who are also interested in the place where Simmons is; only to find an ancient power. At the end of the first half of the season, Fitz and Coulson bring back Simmons while Ward brings back something else.

That brings us to now. Are you ready for "Bouncing Back" on March 8th (the next episode of MARVEL's Agents of SHIELD)? What was your favorite part of Season Three so far? Leave a comment...
Posted by Kyle Tyrone Ferguson at 9:15 PM No comments:


Wizard World Philadelphia is from June 2nd - 5th at the Pennsylvania Convention Center.

Posted by Kyle Tyrone Ferguson at 12:05 AM No comments: