Wolverine and the Xmen are due out in So to give us a taste, we were given a few previews. The first preview is the Chase figure Phoenix Five Cyclops 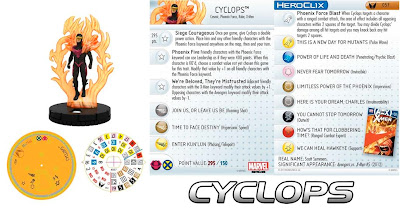 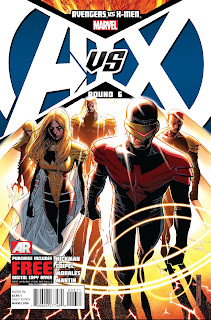 Let's start with what the heck is a Phoenix five. I didn't read the story. It didn't interest me, and you can get the just of it from Wikipedia. In a nut shell, during the Avengers vs. Xmen storyline instead of one mutant being possessed by the Phoenix Force, five of them were. These mutants include Cyclops, Magic, Emma Frost, Namor, and Colossus. This upped there powers and when one of them was defeated, the Phoenix Force would leave them and be divided between the remaining members. This lead up to the only thing I liked about the series. I heard that during a battle Cyclops felt he needed more power, so he took out his ally Emma Frost and absorbed her power. I thought that was funny and totally awesome! 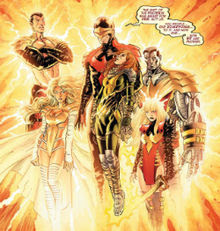 Enough about that, on to more important stuff...the figure! This chase comes in at two different point values, 295 and 150. Already the figure comes out swinging as we know that there are going to be four other chase figures (the rest of the phoenix five) that will have a nice synergy with it. I love the the Phoenix Five trait. The "We're Beloved, They're Mistrusted" trait is also neat and seems to fit thematically.


Playing figure at 150 points:
Coming in at 6 clicks of life, this figure falls in the same trap that most figures with multiple costs options do; Other figure in its 150 point weight class average 7 - 8 clicks of life. Still the traits are powerful enough to warrant some sort of balancing. For it's cost, the combat values are decent and consistent. Cyclops has a 9 range, but doesn't have the Sharpshooter ability. Having Running shot and a potential 6 clicks of damage at the start is impressive and with the new rules (if you aren't familiar with the new rules, check them out at http://www.heroclix.com) for Ranged Combat Expert, there is the option of trading damage for accuracy i.e. a ranged combat action with 12 attack / 4 damage or 11 attack / 5 damage. This figure also sports the Power Cosmic and Xmen team abilities. While the Power Cosmic team ability grants this figure willpower and the ability to not have it's powers countered, the Xmen team ability allows for something interesting. With 2 clicks of support, this figure can receive a click of healing from a fellow Xman with the team ability and then possibly use support to restore the click taken. While this isn't extremely powerful, it's not a bad way to keep the longevity of the team going. The figure starts with Pulse Wave and then goes to Psychic/Penetrating Blast. So for the whole dial, this figure is ripping through damage reducers. For defense, Cyclops has Invulnerability and the new pink power Invincible. The Power Cosmic keeps foes from countering his defense, but this doesn't help when opponents are using Exploit Weakness or Psychic/Penetrating Blast. I'm not sure how I feel about the Invincible power yet.


Playing figure at 295 points:
At full cost, you get an additional 4 clicks of life, the Siege Courageous trait, the Phoenix Force Blast attack power, higher combat numbers, and a few other standard powers. The Siege Courageous trait allows you to place any figures with the Phoenix Force keyword anywhere on the map once per game. While it's nt as powerful as say Big Barda's Boom Tube trait as after moving you end your turn; still if you plan ahead, positioning can be key. Whether a strategic retreat or preparing for an all out assault next turn. Cyclops not only has 5 damage, and outwit on his first click, but he also has the Phoenix Force Blast. This allows Cyclops to make ranged attacks that effect additional targets that are 2 squares away from the initial target and split his damage between them. If an opponent isn't careful, you can use this to deal with figures hiding with stealth. While I'm not a fan of Invincible defense power as of yet, I am a fan of a 19 defense and defense powers that can't be countered. Running shot and Hypersonic speed give you more options for attacking.

There are few figures in 295 Cyclops weight class: Void, Sentry, Odin, and Phoenix

This figure is well put together. Still it's mostly, if not all, about ranged attacks. Since it lacks the sharpshooter ability, some of the goodness that is Cyclops gets shut down when it is based. The sculpt looks extremely cool, but from the looks could be susceptible to easily breaking.

I give this figure a B+
Posted by Kyle Tyrone Ferguson at 4:11 PM